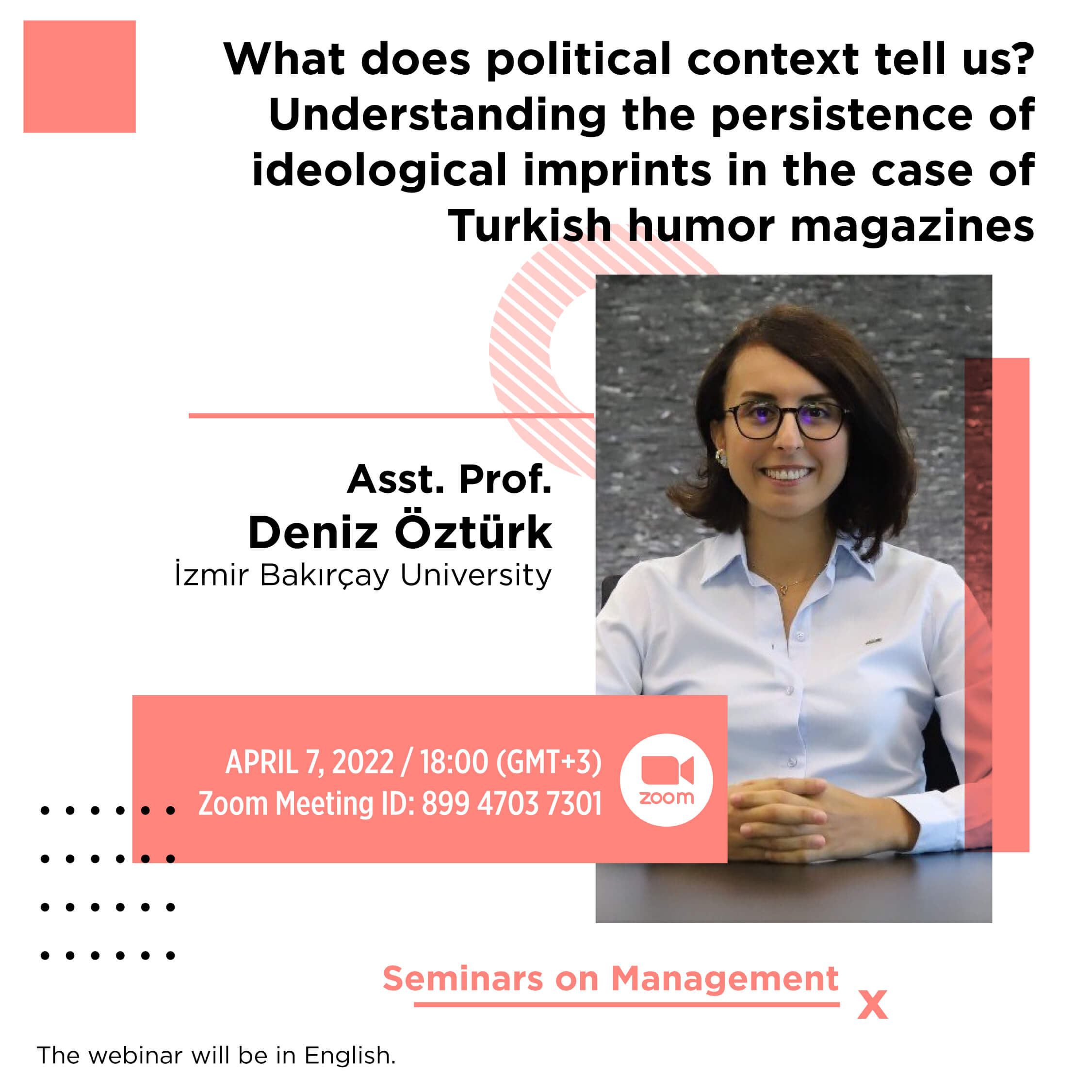 Seminars on Management series, organized by Kadir Has University Department of Business Administration, is hosting Asst. Prof Deniz Öztürk from İzmir Bakırçay University on Thursday, April 7. You can follow Dr. Öztürk’s talk titled “What does political context tell us? Understanding the persistence of ideological imprints in the case of Turkish humor magazines” on Zoom.

Abstract: This talk aims to develop a contextualized perspective for understanding the variation in the persistence of founders’ ideological imprints across different periods. We argue for the time-varying influence of political circumstances on ideological imprinting to grasp the consequences of multiple different imprints. Employing a multiple-case study research design that relies heavily on archival data, we explored the political contextual sources of variation in political cartoons of Turkish humor magazines from 1972 to 2015. Our findings show that the variation in the persistence of ideological imprints is related to political changes that result in (in)congruence between the founder’s political ideology and the ideology of the governing party, the type of political ideology that the founder represents, and change within the party ideology over time. By revealing how political contexts surrounding imprints lead to persistence, we contribute to imprinting theory and the organizational implications of political ideologies in non-Western contexts.

About the Speaker: Deniz Öztürk is an Assistant Professor of Management and Organization Studies in the Department of Business Administration at the University of Bakircay, Turkey. She was a postdoctoral visiting fellow at the University of Edinburgh Business School in 2019-2020. She completed her Ph.D. at Ankara Yildirim Beyazit University, with dissertation titled as “At the nexus of institutional logics and political networks: The case of academic hiring in newly founded management departments in Turkey”. She holds dual master’s degrees from the Public Policy and Administration (MA) program at the London School of Economics and Political Science (LSE) and MBA from the Middle East Technical University (METU), Turkey. She received her undergraduate degree in 2008 from the Political Science and Public Administration Department at the METU.

Her research interests include institutional theory, inequality, alternative organizational forms, and historical imprints. She is currently working on a research project which examines how inequalities are created and perpetuated in the field of refugee labour market integration. Her research adopts both methods of qualitative analysis of texts such as content and ideological discourse analysis and visuals such as multimodal analysis. Her recent article is published at Journal of Management Inquiry. She participated and presented her research at leading international conferences and workshops such as European Group of Organization Studies Colloquium (EGOS) and Workshop on New Institutionalism in Organization Theory. She also worked as a researcher in projects funded by the Scientific and Technological Council of Turkey (TÜBİTAK) and ERASMUS + KA2.

Kadir Has University's website uses cookies to provide an adequate user experience (Cookie Policy). You can view the Informative Text on the PPD Law (KVKK) within the scope of the law on protecting personal data here.
No, ThanksAccept
Manage consent

This website uses cookies to improve your experience while you navigate through the website. Out of these, the cookies that are categorized as necessary are stored on your browser as they are essential for the working of basic functionalities of the website. We also use third-party cookies that help us analyze and understand how you use this website. These cookies will be stored in your browser only with your consent. You also have the option to opt-out of these cookies. But opting out of some of these cookies may affect your browsing experience.
Necessary Always Enabled
Necessary cookies are absolutely essential for the website to function properly. This category only includes cookies that ensures basic functionalities and security features of the website. These cookies do not store any personal information.
Non-necessary
Any cookies that may not be particularly necessary for the website to function and is used specifically to collect user personal data via analytics, ads, other embedded contents are termed as non-necessary cookies. It is mandatory to procure user consent prior to running these cookies on your website.
SAVE & ACCEPT